Like most of Ireland and the UK, I have been addicted to Love Island this summer. One of the struggles of living in the US has been trying to figure out how I can watch the show. Albeit, where there is a will there’s a way and every night I stay off Twitter until I can watch the episode that would have aired only hours earlier at home.

The success of the show has been paramount, with almost 2 million views tuning into ITV every night and the show extending its run from 6 weeks last year to 8 weeks this year. But I was curious as to how the show is cashing in on brand deals? Is there a ‘love island effect?’

The show manages to capture the attention of the 16-34 year old audience, a demographic that brands find the most difficult to infiltrate. Top brands have seen the appeal of Love Island and the opportunity for an hour every night to have the full attention of this audience. This year the ITV show is working with ten different brands compared to three brand deals in 2017.  The brand partnerships include Rimmel, EchoFalls, Primark, Lucozade, Cornflakes, Missguided, Jet2 and Samsung.

This year Rimmel London are the main sponsors of the show, even producing new make-up lines specifically for Love Island such as temporary tattoos. One episode which depicts a ‘club night’ meant that each islander donned one of these temporary tattoos which host Ian Stirling making referenced multiple times in the segment. After the episode aired Lottie London beauty brand revealed a 70% spike in sales of its glitter eyeshadow after contestants Samira and Georgia were spotted wearing it. 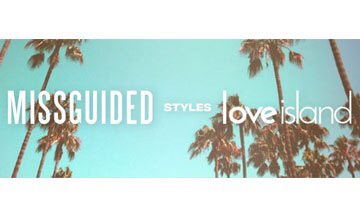 While in another partnership deal Missguided has been dressing all contestants every day. After each episode, if you see an outfit or bikini you like on Meghan or Dani you can shop it instantly on the Missguided website or through the love island app. In an interview with Marketing Week, Missguided’s Chief Customer Officer, Kenyatte Nelson said that NOTHING reaches it’s core 16-29 year-old female audience more than a bunch of hotties in a villa in Mallorca.

‘There’s nothing that exists outside of the Instagram platform that touches on a daily basis, for ten weeks, our core customer – particularly those under the age of 25 – with the depth, frequency and level of engagement like Love Island. On the first day the show aired, our trade – particularly from around the hours of 7pm to midnight – saw an increase of around 40% week on week and its trajectory has been ratcheting up ever since it hasn’t slowed.’

There are also the indirect results of Love Island’s marketing abilities. According to Google trends figures, there was a 100% leap in the searches for ‘veneers Turkey’ and ‘Turkey teeth veneers price’ the same day as Jack spoke about his own teeth. While worryingly the searches for ‘lip fillers’ has also increased during the time the show airs.

Brands are beginning to see the advantages of partnering with the show and the opportunity to target their main demographic. My guess is that next year we will see even more product placement- the first company to sponsor the iconic Love island water bottle is set to make a fortune.